Advertise in the Riverwest Currents ›

Get New Articles by Email

Join 115 other subscribers
Advertise in the Riverwest Currents ›

Get New Articles by Email

Maybe there isn't a single, exact definition of where your neighborhood's borderlines lie, but as former mayor Frank Zeidler once said, you know when you're in it and when you're out of it. This fuzzy definition leaves a lot of room for interpretation—maybe more than you realize.

All neighborhoods, including Riverwest, only exist in people’s imaginations, but that doesn’t mean they aren’t real. What we each imagine helps make up the collective sense of place and identity for the whole community.

What people imagine and believe about their place in a city may even help establish customary identities and borders that have no legal authority but are nevertheless treated as certain, absolute, and inviolable.

Test yourself on this. What are the borders of your neighborhood? Unless you’re a newcomer, when you think about this question, definite answers probably come to mind right away.

Where did you get those answers?

How certain are you that they are right?

Maybe there isn’t a single, exact definition of where your neighborhood’s borderlines lie, but as former mayor Frank Zeidler once said, you know when you’re in it and when you’re out of it. This fuzzy definition leaves a lot of room for interpretation—maybe more than you realize.

You might be surprised at what others imagine and have imagined about Riverwest.

Tom Tolan’s forthcoming Riverwest: A Community History points out that in 19th Century Milwaukee there was no “Riverwest.” There was just one big, mostly German, “North Side.” Then near the turn of the century with the founding of St. Casimir’s parish, Polish residents in St. Hedwig’s parish around Brady St. referred to Riverwest as “Zagora,” which means “beyond the hill.” Poles who referred to the “North Side” usually meant Riverwest, which German North Siders called “Polish Town.”

Today the “North Side” is identified with Milwaukee’s biggest concentration of African Americans, and the East Side is markedly white. In between the “North” and the “East,” “Riverwest” was imagined into being.

As an in-between space, Riverwest is porous, amorphous, and not as fixed in its identity–or as rigid—as some other neighborhoods, like the East Side. The name “Riverwest” didn’t come into published usage until 1978 in the East Side News as a simpler name than “west-of-the-river community.”

Founded in 1974, ESHAC (a community-based organization and publisher of East Side News) identified everyone east of the freeway as its constituents. Most Riverwesters “know” the East Side is east of the river. But if they happen to be in West Allis and are referring to Riverwest, they might lump it in with the East Side. Similarly, a lot of African Americans consider everything east of I-43 or at least King Drive to be the “East Side.”

Although Riverwest is sometimes absorbed into the East Side, the opposite can also happen. I have heard reports of colonies of UW college kids in the Oakland Avenue area referring to their part of town as “Rivereast.” For all the bad press it has gotten over the years–and probably because of it–Riverwest has wannabees! (East Siders: if you have a painful street cred deficiency, an association with Riverwest can be the cure as long as you stick to the bohemian authenticity zone located in central and southern Riverwest. North of Locust Street lie the “Riverwest suburbs,” thought by some to be unfashionably respectable.)

There are potentially less humorous and more consequential differences of opinion regarding Riverwest’s southern borders. While Lakefront Brewery’s ads maintain the traditional opinion that it is located at “the southernmost point in Riverwest,” the condo developments along Commerce Street and “Beerline ‘B'” seem to be part of a different neighborhood. The Department of City Development‘s current map of Beerline B (also the 110th Ward) cuts through land that the DCD formerly described as part of Riverwest and Harambee. Other city maps and websites give conflicting information that draws Riverwest’s southern border at North Avenue or the river. (See, for instance, the maps linked to the city’s neighborhoods web page.) The most commonly-heard description of Riverwest’s boundaries set the neighborhood between Holton and the River, and North to Capitol.

Whatever your take on where our neighborhood ends and begins, if you’re in it, you’re part of a place with an interesting past (as you’ll see in months ahead as we run excerpts from Tolan’s forthcoming book), an interesting present (as you can see each month in the Currents), and an interesting future that you can help create.

Addenda: Glenn Siettmann, Geographic Information Supervisor for the DCD, informs me that “the Commerce St. condo developments (Beerline ‘B’) will not be defined as a distinct neighborhood. It will still be considered Riverwest.” However, this is not readily apparent on the DCD’s current website for the Beerline where there is no mention of Riverwest. This in itself does not signal some kind of gentrifying “annexation” of the southern end of Riverwest, and it would seem that the recent tendency of some residents to place Riverwest’s southern border at North Avenue is largely a self-elected reaction to the Beerline redevelopment which includes the Jewel-Osco on North and Humboldt. Riverwesters who protested the construction of the Jewel-Osco and the clearing of the formerly wooded bluff above Commerce Street are probably the ones most inclined to react in this way. But as in the case of some people west of Holton who consider themselves Riverwesters, I know of one person on the Beerline who is open to considering himself a Riverwester even while he recognizes the strong physical separation of the Beerline at present. Clearly, it remains to be seen how people above and below North Avenue choose to imagine and identify themselves and their neighborhood(s). The interaction of their senses of place will no doubt contribute a great deal to the changing culture of the city north of downtown.

Related Articles by the Same Author:

Quiz: How’s your neighborhood literacy? Can you find Blackfish Bay on the map? White Folks Bay? What East Side neighborhood formed the infamous Sewer Alligator Patrol in 1873? Where did Jedediah Springfield sleep in Milwaukee on his expedition from Illinois to the UP?

The Milwaukee Neighborhoods Identification Project map (May, 2000) explains that:

“Milwaukee has had neighborhoods in one form or another going all the way back to the dispute between Byron Kilbourn and Solomon Juneau. Some neighborhoods have been drawn on maps and others have not. Most of the existing neighborhood definitions were created for specific purposes, so there has never been a single, comprehensive, stable, agreed-upon delineation of neighborhood areas throughout the City. In recent years, community groups have become more involved in defining neighborhood areas, and conducting improvement programs within those areas. . . . In 1990, a study group of Future Milwaukee, working with DCD, put together a map defining 75 City neighborhood[s]….”

Look at the current map yourself and read how the neighborhoods were defined and what criteria were used. Send your comments by mail or email to: DCD Information Center P. O. Box 324 Milwaukee, WI 53201 gsiett@mkedcd.org

Are there still borders? More than ever! Every street has its border line. Between each plot, there’s a strip of No Man’s Land disguised by a hedge or a ditch. Whoever dares will fall into booby traps or be hit by laser rays. The trout are really torpedos. Every home owner, or even every tenant nails his name plate at the door like a coat of arms and studies the morning paper as if he were a world leader. …. Everyone carries his own state with him and demands a toll when another wants to enter: a fly caught in amber or a leather bottle. So much for the border. But one can only enter each state with a password. 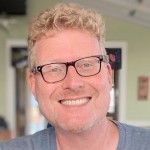 Dan Knauss is principal of New Local Media, an open source web application design and development consultancy. He lived and worked in Rivereast, Riverwest and Harambee from 1999-2011. Dan built and has maintained the Currents website since its debut in 2002. During the early noughties he blogged and wrote for the Currents. He now lives with his family in Canada.