You are here: Home › Chickens in the Yard 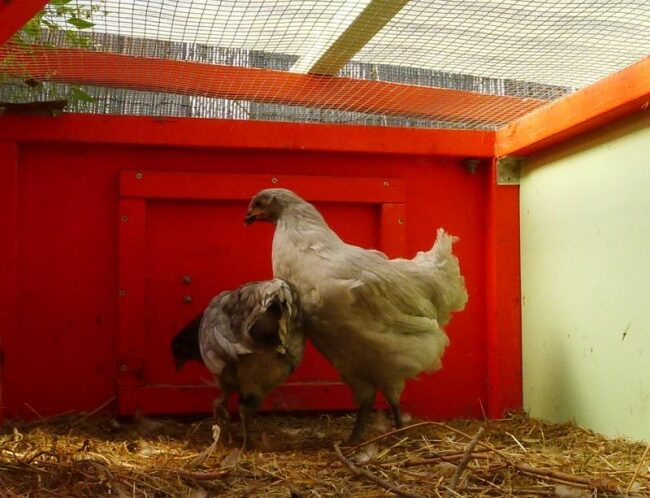 Let’s call this “Backyard Chickens 101.” Or “Intro to Urban Chickens.” Or something like that, because you’re learning along with me. Unless you already know a lot about raising chickens in your yard. Then, I suppose, you can just enjoy the pictures.

As a wanna-be chicken owner I’m getting as much information as I can from Riverwest folks, Katherine Wilson, Claire Moore, Jessica Lane and Keith Hayes, who are tending their own flocks.

Here are some basics.

To keep chickens you need a coop and a run. The coop is a fully-enclosed building with various door and ventilation possibilities.

According to Katherine, “There’s lots of ways to design a coop.”
Keith’s coop is a winner from a “coopetition” that was held in 2012 to design a chicken coop from reused materials, in this case, white plastic barrels.

The run is a cage. It’s an open, fenced structure that can take many forms. There are requirements of sizing per animal. Claire’s eight-by-ten foot run is sufficient for her three hens. A variety of roosting choices is pretty much a requirement as one never knows which will tickle a chicken’s fancy on a given day.

Every backyard chicken is female. Roosters are prohibited in the urban programs. So the pullets I met are teen-aged girls and the adults are hens. It only takes a few months for them to mature. Hens often have a comb – the red growth on top of the head – and a wattle – the red part that hangs down from the chicken’s cheeks.

It is quite possible your neighbors will barely notice the coop’s presence. Chicken-keeping is a rather quiet activity. Only roosters crow. Hens cluck. And each girl has her own unique cluck. Claire describes her black hen Sebastian’s cluck as “low and growly, while Fluffy has a higher, melodic cluck.”

However, there are minor exceptions, as in the case of Wesley who has taken on the role of rooster-like protector over Luke (Skywalker). “I’ve heard that some chickens can, like, gender-bend a little bit,” says owner Jessica. She reports that her hen, Wesley, “will go up on the top of the fence in the morning. She won’t crow, but she’ll cackle for a while.”
Not only do the chickens have personal clucks, they also have very definite personalities. Sebastian has a lot of character and is very smart. “She’s a fast twitch one,” says Claire, which means she is high-energy, hard to catch, has good survival skills. Star, the golden-rust girl is pretty but stupid. Fluffy is docile, lackadaisical, easy to get along with and to catch. Jessica’s Wesley is, not surprisingly, hard to catch and Keith’s Biscuit is not people-friendly, although I watched her share with coop-mate Sam.

Different breeds of chickens lay different color eggs. After the recent relocation of community members who took their run and chickens with them, Katherine’s flock is composed of two pullets. One is a Lavender. She’ll lay pink eggs when she matures. The other “teenager” is a blue egg layer, an Ameraucana.

“In total my plan is to get two more laying hens so that all four will lay different colored eggs – a pink egg, a blue egg, a dark chocolate-colored egg, and a brown or white egg,” says Katherine delightedly. A Blue Copper Marans will supply the chocolate brown egg.

And eggs you will collect, as long as your hens are content. In their prime last year, Keith says his Sam and Biscuit laid five to six eggs per week. Summer comfort has provided about an egg per hen per day for Claire. In winter the number decreases, but they do still lay.

The chickens remain outside for the winter. There are cold-hardy breeds that can just do fine in the snow. Claire says hers like a snow-free area in their run.

“Chickens need a certain amount of daylight and heat in order to produce eggs,” explains Katherine. You can simulate a longer day by having a lamp in the coop, as she does. Keith adds warmth and light with red lamps and heated animal pads.
Claire’s hens get the benefit of a dog kennel heater in winter. “Just enough to keep above freezing.” Jessica’s birds winter over without the help of anything other than shared body heat.

Even in the city one must protect the birds from predators. Most of the coops get locked up at night and run fencing may reach well into the ground. Rats, raccoons, opossums, cats, and large birds number among the possible threats.
Unfortunately, Jessica learned the hard way that people can also be on that list. She had two of her four hens stolen. One of them was her buddy Kilbourn, a bird with a wonderful personality who left a trail of tales behind. The other was Buttercup, named for Wesley’s true love in The Princess Bride.

Everyone I talked with allows their chickens to forage, scratch and adventure in their yards. The hens find tasty grubs, insects and greens to feast upon. Of course, for the less twitchy, there’s need for a human to keep an eye on the sky.
The more I learn, the more I look forward to walking out to my backyard coop to find a freshly-laid egg for my breakfast. After, that is, saying, “Good Morning!” to my feathered friends.