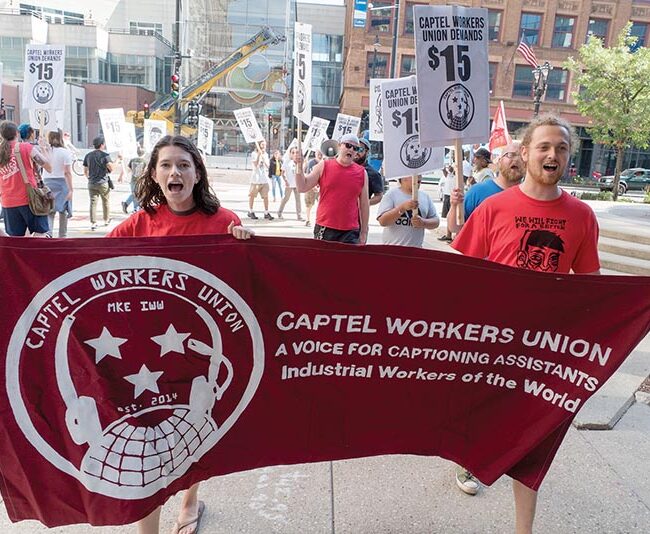 By Currents Staff on September 2021 in Business Briefs

The Milwaukee branch of the Industrial Workers of the World will soon have its first physical home in the location formerly occupied (until January 2020) by Riverwest Law Firm – 814 E. Center St.
Flora Contracting Cooperative, Shaky Hands screen printing cooperative and Cream City Media, LLC moved into the location earlier this year. The main function of the space will be meeting and office space for IWW. Remodeling is underway by Flora to accommodate the site for its new occupants.
The IWW is an international labor union established (and still headquartered) in Chicago, Illinois in 1905. According to its website, the union represents 9,000 workers across North America, and has branches worldwide, including in Europe and Australasia. Recent IWW activities include fighting for workers’ rights (such as a living wage, safe workplaces and parental leave) with the workers of Voodoo Doughnut in Portland, Oregon and Dill Pickle Food Co-op in Chicago.
The Milwaukee IWW branch was chartered in 2000-01, and meetings are usually held in local libraries, coffee shops and residences, according to member Jason Geils. Recent Milwaukee IWW activities include a public campaign that helped the employees of CapTel, Inc., a phone-captioning service that employs nearly 800 workers downtown, per the Milwaukee IWW website.
“The CapTel committee [CapTel Workers Union] won a bunch of things for the workers there, including pretty sizable raises, better scheduling and the ability to work from home during the pandemic,” Evan Maruszewski, co-secretary of the Milwaukee IWW, told Riverwest Currents.
Another recent activity of the Milwaukee IWW is advocacy for prison reform, such as the end to the exploitation of prison labor and, more generally, decarceration, through a prisoner (or incarcerated person)-led program of the IWW called the Incarcerated Workers Organizing Committee (IWOC). Actions of that program include work stoppages, hunger strikes and phone zaps (organized calling of an official or office to pressure that entity to enact a specific change).

Flora Contracting Cooperative was established in 2019 by Geils and Joe Stubbs and does carpentry, painting, design and estimating. Flora currently has six worker-owners, one of whom is Geils’ partner, Sophia Larson. Larson is the worker-owner of Rasa Cleaning Services, which does interior residential and light commercial cleaning, and is part of the Flora cooperative (it is a DBA – it does business as Rasa, according to Geils).
Shaky Hands is a screen-printing cooperative formed in 2020 by Quinn Derive and four of their friends and roommates in the kitchen of their Williamsburg Heights (north of Harambee) residence as they were sheltering in place. Shaky Hands currently has four worker-owners, two of whom are Derive and Maruszewski, and they print art and designs on garments such as t-shirts and on other items such as tote bags and posters. The printing is done at the Center St. location. Shaky Hands is an autonomous co-op, though it is now or will soon be a DBA of Flora
Cream City Media, LLC was established in 2006-2007 as a videography company by Maruszewski and his brother, Steve Greentree. That business dissolved in 2012, but Maruszewski has since re-formed it, and now runs it as a sole proprietorship. CCM does web design and development, animation, and video game development, among other services.
Flora Contracting Cooperative is represented as a business by IWW, and all six of its worker-owners are, per Flora Contracting Cooperative policy, members of IWW as individuals as well, according to Geils.
All four worker-owners of Shaky Hands are members of IWW, and Shaky Hands as a business is in the process of applying for IWW representation, (its ‘shop card’, as it is called) according to Derive and Maruszewski.
Cream City Media as a business is represented by IWW, according to Maruszewski.

There are several different types of cooperatives. Outpost Natural Foods and Riverwest Co-op & Cafe are ‘consumer co-ops.’ Anyone, consumers or employees, can purchase a membership, which is their ownership stake, and gives them a vote in the annual board of directors elections. Those boards run the co-ops. Usually the board hires a General Manager to report on operations to the board and to make day to day decisions for the business.
Unless they purchase a membership, Outpost employees do not have an ownership stake, nor any decision-making authority. According to Outpost’s website, most employees are members of the United Food & Commercial Workers Union.
Riverwest Co-op & Cafe staff get a discounted rate on product purchased and take part in decisions, in coordination with the board, via the ‘workers collective,’ according to the co-op’s website and Riverwest Currents editor and publisher Vince Bushell, who is a co-founder and former board member of the co-op, and co-owns the building where it is housed. A significant difference in Riverwest Co-op & Cafe is the business does not have a general manger. This is rare.
There are coordinators in specific areas, and the coordinators do hire staff on their own and run the day to day operations. Employees may purchase a share but are not required to be members.
Flora and Shaky Hands are worker-owned cooperatives. Definitions of worker co-ops differ, but for these two entities, there are no bosses or employees. Decisions are made democratically, and the businesses are owned by the workers.
According to the 2019 Worker Cooperative State of the Sector Report, a study by Democracy at Work and the U.S. Federation of Worker Cooperatives, as reported by Fifty By Fifty, an initiative of The Democracy Collaborative, a nonprofit think tank based in Washington, D. C., in early 2020, there were 465 verified worker cooperatives in the U.S. Their definition of a worker cooperative is that it must be incorporated, have at least three worker-owners, have at least 50% worker ownership, and must have been in business for at least one year.
The Democracy Collaborative’s summary notes that this is a 35.7% increase in worker cooperatives since 2013, and that based on their (the study authors’) work in the field, the 465 number is most likely conservative, and they estimated that the number is probably closer to 800.
Consistent with the previous year’s study, according to the summary, the average top-to-bottom pay ratio as reported by the participating workplaces was 2:1. The summary notes that the average top-to-bottom pay ratio of “traditionally structured businesses” is 303:1.
The University of Wisconsin’s Center for Cooperatives’ website defines worker cooperatives as “owned and operated by their employees,” and states that their “profit distribution to worker-members is based on a combination of job position, hours worked, seniority, and salary.” The website states that there are over 500 worker cooperatives in the U.S., with combined employment of over 8,000 people. The website notes that there are a combined 728 cooperatives of all types in Wisconsin.
Another type of co-op is multi-stake, one example of which is Milwaukee Mesh Cooperative, according to Maruszewski and mkemesh.org. Multi-stake co-ops have both worker-owners and consumer-owners, and those groups may have different roles and interests in the business, according to the UW Center for Cooperatives. Milwaukee Mesh Cooperative is, according to its website, an in-development, net-neutral internet service provider. It, along with Flora, Rasa and Shaky Hands, are part of a collection of projects, some in-development, some up-and-running, called the Milwaukee Solidarity Economy. A stated goal of that group, according to its website, is to “democratize the way we live and work, through participatory cooperation.” Other projects in that group include community gardens and a Milwaukee Tool Library.
The IWW is not part of the Milwaukee Solidarity Economy, but they both appear to have at least one common goal: workplace democracy. With its first permanent home base, Milwaukee IWW’s prospects of advancing that goal may be more robust than ever.