You are here: Home › Spotlight – Terry Wiggins – February 2020
By Adam Krueger on January 2020 in Ecology and the Environment, Neighbor Spotlight 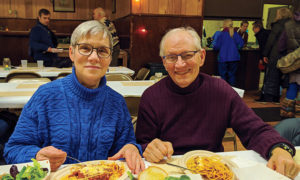 Terry and Bruce Wiggins at the Riverwest Co-op Spaghetti dinner

Coming into the Riverwest Co-op on Mondays you may run across a regular volunteer named Terry Wiggins. She is sweet and silver-haired woman.  Terry is retired now but has worked as a purveyor of books all across the country including time at Princeton University. She carries herself with the relaxed air one often finds in natives of California. After growing up on the West Coast and spending time on the East, she has settled with her husband of forty-six years in the Midwest, here in the Riverwest neighborhood of Milwaukee in order to be closer to her daughter. Now thanks to the First Unitarian Society of Milwaukee she has found a community and a greater sense of purpose in the activism supported and fostered by the church. The church is centered on social justice as you will see through their newsletters, their website, and through talks with the Reverend Jennifer Nordstrom, a Wisconsin native, who has been involved in activist circles, protests, and social justice advocacy for years.
So it might come as a surprise to find out that Terry Wiggins, and regular churchgoer has been arrested multiple times. Of course there is good reason for this, as Terry will happily explain. Wiggins believes firmly that the destruction and chaos of climate change will endanger the planet and all of humanity. Thus far the science is on her side. Terry was raised as an environmentalist and as she explains it, earth care has called her to religion. Wiggins has spent six years as a treasurer for Unitarian Universalist Ministry for Earth.

Since becoming more involved in climate activism every year she and her husband make a pilgrimage to the Prairie Festival and Land Institute. They find their work developing polycultural plants, that work in harmony with nature, inspiring.  Now Terry is involved with an interfaith network of multiple climate-focused groups in Wisconsin.

Because of Terry’s deeply rooted concerns about the planet and the activism encouraged by her church she has been arrested twice for actions of civil disobedience. The first time was in 2011 as she fought against the Keystone XL Pipeline. That year Terry Wiggins sat in the Whitehouse front lawn alongside other activists in order to ask President Obama to veto the pipeline. On December 6, 2019 Terry was arrested again at the Wells Fargo Bank on Water Street and Wisconsin Avenue in Milwaukee during a sit-in organized by the People’s Climate Coalition, a youth-led organization. The location was chosen due to higher visibility than other branches in the city. The protest targeted Wells Fargo and Chase Bank as they have lent hundreds of billions of dollars to the fossil fuel industries since the Paris Climate Agreement was signed.

A second group of activists came from a rally earlier that winter morning in Zeidler Union Square. They were led by a drum line from North Division High School and stood outside the bank as Terry Wiggins and ten others sat blocking one of the entrances for two hours. For this time the police stood by asking the protestors blocking the entrance to vacate the premises. After refusing to leave all eleven at the sit-in were arrested. There was no negotiation according to Wiggins. Their goal was to raise awareness about climate change and those that enable it in hopes to enact legislation.

Yet in her later years, Terry Wiggins shows no signs of slowing down in her protests as she continues to find inspiration from the church and from people like Greta Thunberg. Wiggins loves the sense of community and purpose it gives. As I sat down with her over coffee in the Riverwest Co-op on January 14th of this year, Terry tells me she is planning to go downtown to protest President Trump with other friends from the church, led by Rev. Nordstrom. Terry Wiggins does not know how many arrests may lay in her future, but as she looks to her granddaughters she says she knows her acts of civil disobedience and protest are the right things to do for the sake of them and for the planet.

(Editor’s note: At Wiggins’ request, some changes have been made to this document after being published in the Riverwest Currents printed addition. These changes more accurately reflect Wiggins work as a climate activist.)

Calendar February 2020 RWcurrents
Our History Begins With The River