You are here: Home › Mike Fredrickson: Practicing the Pursuit of Sanity
By Vince Bushell on December 2019 in Arts & Entertainment 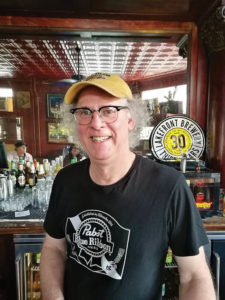 I met with Mike Fredrickson at the Uptowner with the intent of writing a profile on him. He’s lived in Riverwest for years, is an accomplished artist and musician, and is without a doubt the most prolific person I know. I had intended to write the article with the angle of “local artist uses Riverwest scenes as subject matter” but soon found out that his choice of subject matter was based more on circumstance and lighting than on anything particular to Riverwest.
I felt frustrated realizing that my original “angle” would not work and told him so. We’ve known each other for years and he simply shrugged and agreed that if the article didn’t happen it wasn’t a big deal. We sat and chatted and told stories and I mentioned the Ray Bradbury book that I’d been reading.
“Zen in the Art of Writing” by Ray Bradbury is a collection of articles that he’d written about the practice of writing. The article that the book’s title is taken from talks of WORK, RELAX, DON’T THINK (not in that particular order), as Bradbury goes on to explain.
Bradbury writes about the importance of practicing and I’ve long been intrigued by the notion that it takes 10,000 hours to become an expert in any field. The idea is often credited to Malcolm Gladwell although I remember first hearing this when getting my BFA in the late eighties.
Some recent studies have debunked the notion finding that the margins of increased performance were variable depending on the area of study and that 10,000 hours can’t be held as a hard and fast number. This clearly misses the point. The point is that most disciplines (i.e. art, sports, science, medicine) require more than just instruction and talent; practice is required, and a lot of it.
(I have a friend who has worked for 30 years as a computer programmer and who still, after that many years, pursues continuing education and builds non-work-related software in order to hone his craft. Clearly, he is passionate about his chosen area of study and doesn’t think of this pursuit of knowledge and practice as a burden. He told me that he’d long had a book idea but hadn’t started working on it. I assume that he had the same notion that I’ve heard from many other people, that given enough free time, he would sit down one day and write the book and that it would just flow out. His justification was that he was intelligent and had read a lot of books. I asked what he would think if someone with no programming experience would propose that they could create a complex and functional computer program based on the idea that they were intelligent and had years of experience using software. I’ll let you fill in the blanks on that conversation.)
When I brought up the ideas of WORK, RELAX, DON’T THINK, Mike agreed adamantly with the WORK and DON’T THINK aspects, although he argued that the RELAX aspect didn’t fit for him. He explained that he feels better when he’s creating something. He bristled at being quoted, but said “When I’m not painting, I feel like I’m loitering in a useful body.”
He identified with the DON’T THINK aspect and explained, if you’re not doing the work, you just sit around worrying – about death, lack of money, whatever, you pick. The TV was alternating closed captioned stories about Trump’s impeachment and the most recent school shooting as we had this conversation.
He went on to confirm my understating of the 10,000-hour rule in that it’s about the idea that the work is the reward. If you wait for inspiration before you work, you are missing the point. “An artist practices, not for the sake of productivity or for expertise but rather in the pursuit of sanity.”
Mike’s paintings are on permanent display at Linneman’s Riverwest Inn and The Uptowner and are for sale at The Roast or at his studio on Center Street (where he paints for six hours every day) or at mikefredrickson.weebly.com. He is also a bassist and songwriter and has recorded fifteen full length albums. His new band is called Bristlehead and they are playing at The Uptowner monthly.

Note from editor Vince Bushell: This article includes several of Mike Fredrickson’s street scenes in Riverwest. They are highly recognizable places to the denizens of the place we call Riverwest. His portraits are magnificent. His music has entertained me for decades. His pursuit of sanity results in creations that are an opening for release to us all. I was asked if I wanted to attend his performance at the Uptowner this week. I didn’t make it. That is my loss. 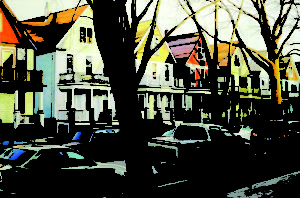 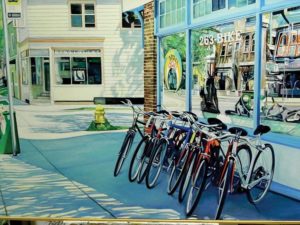 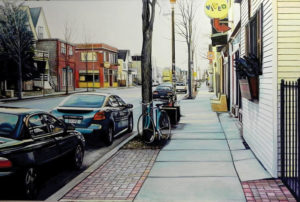