You are here: Home › Health Matters: NEW Vaccine Can Help Prevent Cervical Cancer!
By Currents Staff on January 1970 in Uncategorized

A vaccine that can prevent cancer? Its true, and its available in many doctors offices right now.

This new vaccine is recommended for adolescent girls. It protects them against HPV, or human papillomavirus.

HPV is the most common sexually transmitted virus in the US. About 20 million Americans are infected with HPV, with more cases every year. While both men and women can become infected, HPV is significant for women because it can cause cervical cancer.

It is important to point out that there are many types of HPV. Most HPV infections do not cause symptoms and will clear up on their own. However, some HPV infections can lead to genital warts or reproductive cancers.

While cervical cancer was once a leading cause of cancer death for women in the U.S., the past several decades have shown a big drop in cervical cancer deaths due to screening with the Pap test. The Pap test is a method of testing cells from a womans cervix for precancerous changes. Women should start getting Pap tests at the age of 21, or three years after first sexual intercourse, whichever comes first.

American women have better opportunities for cervical cancer detection and treatment than women in many other countries. The HPV vaccine has the potential for a great impact worldwide, especially in countries where women have little access to preventive healthcare. Nearly half a million women worldwide will develop cervical cancer each year, and a quarter of a million will die.

Currently the HPV vaccine is recommended for girls 11-12 years of age. As with all vaccines, you should discuss medical history, allergies, risks and benefits before getting vaccinated. If you are interested in getting the HPV vaccine for your daughter, check with your doctors office and your insurance company. This vaccine is very new and many insurance companies will not provide reimbursement. The cost of the full three-dose series runs between $300 and $400.

Emily DeLeo is the Community Health Liaison for the Riverwest Health Initiative. She can be reached at 263-8383 x.139. 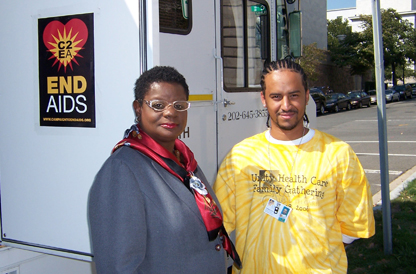 On Sept. 27, Congresswoman Gwen Moore spoke on the floor of the U.S. House of Representatives about the effects of HIV/AIDS on the African American community, as part of a concerted effort by the Congressional Black Caucus (CBC) to highlight the disproportionate number of African Americans suffering from HIV/AIDS.

While these data are appalling and frightening, we must remember that this is entirely preventable, said Congresswoman Moore. And we must spread the hope of preventing AIDS.

In order to bring attention to the importance of getting tested for HIV/AIDS, Congresswoman Moore joined other members of the CBC this afternoon in obtaining what is known as an HIV/AIDS swab test from a medical mobile outreach vehicle provided by the Washington, D.C. Department of Health. The swab test is pain-free and non-invasive, examining saliva for the presence of antibodies created by the body in order to fight HIV/AIDS. Results are also timelya positive or negative diagnosis is available within 20 minutes.