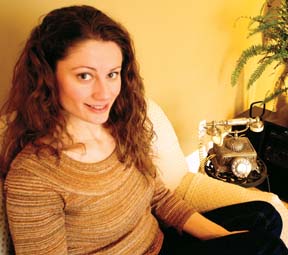 By Jackie Reid Detloff on February 2010 in Neighbor Spotlight

The popular establishment named for thefamous aria in Giacomo Puccini’s Turandot is no longer theonly note of opera in this neighborhood. Neither is the FlorentineOpera, newly moved into their new digs on Burleigh Street. As ofApril, 2009, classically-trained soprano Ruth Brown has taken upresidence here and begun to offer the pleasure of operatic music toRiverwest audiences.

For three consecutive Friday eveningsin December, Ruth performed “arias ranging from Handel to Puccinito traditional Christmas carols” in her Riverwest home on the 2200block of North Booth Street. She says the venue was “perfect forcreating the intimacy performers want with their audience.”

With her slender build and ready smile,Ruth could be mistaken for merely sweet. But make no mistake: RuthBrown is a woman with vision, with a mission. She wants to bringopera out of the gilded cage of the Highbrow and introduce it to awider audience. “I’d like people to experience how wonderfulopera is. It doesn’t have to be intimidating – it can be madevery accessible. Opera can move you in ways that other art forms donot. Even when the lyrics are in an unfamiliar language, the musiccan convey great depth and range of human feelings. Partly that’sbecause the melodies are so touching.”

So watch for Ruth’s name as shesettles into the Milwaukee performance scene. She appeared with theMilwaukee Opera Theater in Elm Grove on January 31 in “an afternoonconcert guaranteed to take the chill out of winter.” She plans toaudition with other Midwestern opera companies and envisions doinganother house concert later in the year.

Ruth sees Milwaukee as a good sizedcity with a vibrant performing arts scene and says, “It is an honorto begin finding a place in it.” Raised in Waukesha, Ruth appearedin productions at Carroll College before leaving to study at theNorth Carolina School of the Arts in Winston-Salem and then inLeipzig, Germany. It was there that she met Dr. JeanetteFavaro-Reuter, a voice teacher from Milwaukee, of all places. “Jeanette helped me find my voice, helped me find my own uniquestyle, and taught me how to let it out. She was a wonderfulteacher.”

Ruth married Matt Brown in 2005. Originally from Wauwatosa, he moved to Germany to support Ruth in hercareer. Matt’s interest has been in ministry. He has steadilypursued studies at Trinity Divinity School in Chicago while becominginvolved with ministerial work in Leipzig and most recently inMilwaukee. It was “the pull of family and friends” that broughtRuth and Matt back to Wisconsin. They have become active members ofthe Metrobrook congregation on N. Van Buren Street south of State. With close friends Brent and Kate Halfwassen they share a commitmentto the Riverwest neighborhood.

Ruth’s business card asks, “What ifthe Opera came to you?” It lists occasions where her singing couldcaptivate you “with the elegance of light opera, operetta andmusical theater,” suggesting events like family celebrations,community gatherings and fundraisers that she could enhance with hermusical talents. Maybe Ruth should sing at Nessun Dorma. Maybeyou’d enjoy visiting her website at www.ruthbrown.org.